Marissa de Boer (UvA), Jill Coster van Voorhout (UvA) and Bernadette de Bakker (Amsterdam UMC), together with their teams, are the winners of the Science & Innovation Awards 2019. The three researchers receive 7.500 euros to further develop their ideas and bring them to the market.

In the category Alpha/ Gamma, the research team of Jill Coster van Voorhout of the UvA received the Award for their innovation of combining various research methods to trace criminal in bank data. With this innovation, tracking down crimes like human trafficking, money laundering and corruption becomes more effective and secure.

In the category Beta, the Award was allocated to the “SusPhos process”, which addresses the phosphate issue. The research team of Marissa de Boer of the UvA is developing technology that aims to generate a circular phosphate economy by processing phosphate-containing waste into high quality products such as fertilizer and fire retardants.

In the category Life Sciences, the team of Bernadette de Bakker of Amsterdam UMC won the Award with 3D printed models of embryos. The embryo models that are currently used in medical education are outdated and expensive., With the customized 3D embryo models, doctors and midwives can better recognize birth defects.

Jury chair Gigi Wang, entrepreneur specialist and affiliated with Berkeley University, praised the high level of the 66 submissions, of which 9 finalists were selected. The finalists pitched their innovation live in front of an audience. According to Wang, the three winners show that the Netherlands are at the forefront of innovation: “value propositions based on interesting science and technology have already been created, which potentially have a major impact on society.” 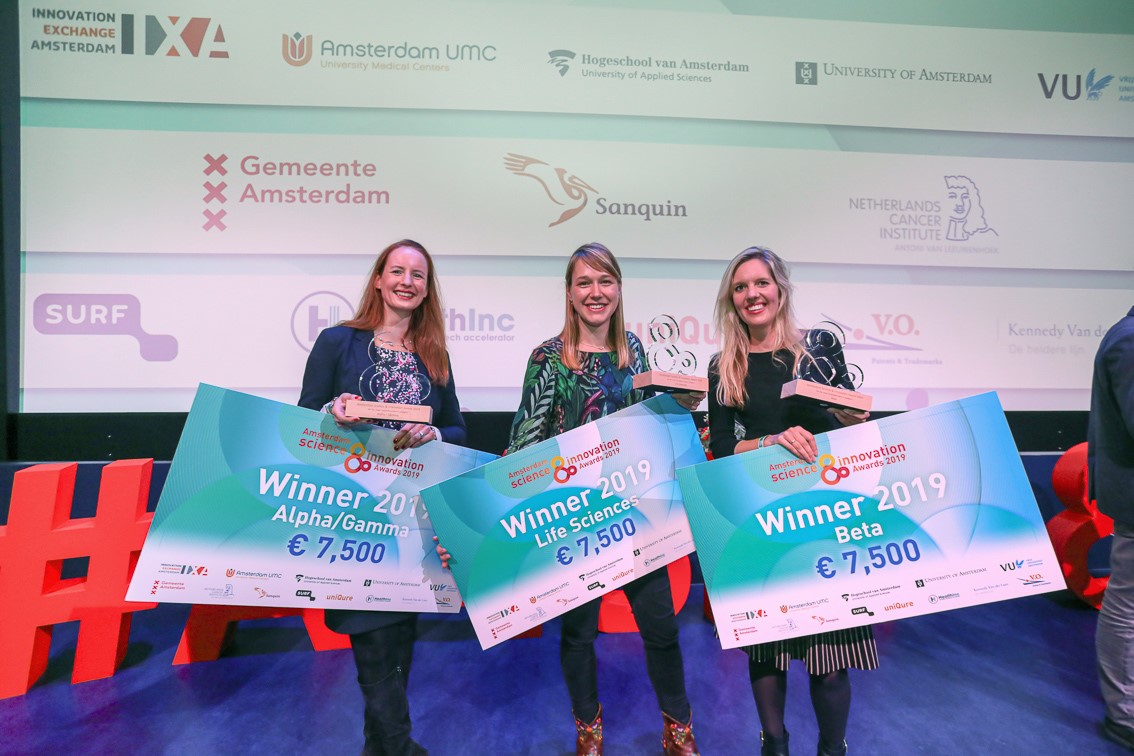 Impact Awards
During the Amsterdam Science and Innovation Awards 2019, three Impact Awards were presented as well. This Award serves as an acknowledgement for scientists and researchers from Amsterdam who have made a meaningful contribution to society.

Jaap Bonjer, professor of surgery at Amsterdam UMC, received the prize for the establishment of the Amsterdam Skills Centre for Health Sciences (ASC). As a result, the Netherlands has one of the most advanced training centers for surgical skills in the world. In this centre, the training period of surgeons can be shortened considerably.

Erwin Peterman, professor of Physics and Living Systems, and Gijs Wuite, professor of Physics and Life Processes (VU) received the Award for the development of high-quality equipment such as the C-Trap, a combination of optical tweezers and a fluorescence microscope, with which the smallest details of cellular processes can be mapped. This formed the foundation for LUMICKS, a successful company with 100 employees. Around the world, 40 research groups already use LUMICKS’ instruments.

Roeland van Geuns, lector Poverty Interventions at the University of Applied Science (HvA) received the Impact Award for his research on poverty and debt issues. Van Geuns developed instruments to manage debt positions and make debt discussable. This has had an important social impact.

An honorable mention went to Willem Bouten, Professor of Computational Geo-Ecology, of the University of Amsterdam for his innovation of lightweight GPS trackers for birds. These trackers and radar can predict bird density and large-scale bird mobility. This information is important for aviation and windmill farms.

About the Amsterdam Science & Innovation Awards

The Amsterdam Science & Innovation Award is a price for the most innovative research-based idea of Amsterdam. Fourteen years ago, the Knowledge Transfer Offices of Amsterdam UMC, UvA, HvA and VU (later jointly named Innovation Exchange Amsterdam, or IXA), organized this competition to make the valuable ideas based on scientific research visible.

The Impact Award has been created for scientists and researchers who have already made a major contribution to society.

Jaap Bonjer (Amsterdam UMC), Erwin Peterman and Gijs Wuite (VU) and Roeland van Geuns (HvA) receive Impact Awards 2019. The Amsterdam Impact Award is awarded annually to distinguished researchers or research groups who have made a meaningful contribution to society with their research and innovations. The award is a lifetime achievement award, not a cash […]

Finalists Reinout Bem  and Imran Avci were interviewed by Karlijn Meinders in BNR’s broadcast Wetenschap Vandaag during Spitsuur. To listen to the interview click here.