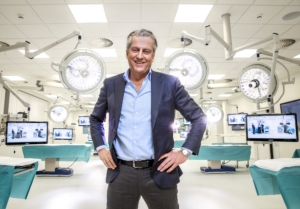 Jaap Bonjer, professor of surgery at Amsterdam UMC,   receives the prize for the establishment of the Amsterdam Skills Center for Health Sciences (ASC). Because of this, the Netherlands has one of the most advanced surgical skills training centers in the world, with for instance 12 operating rooms and various laboratories. The ASC is a collaboration between Amsterdam UMC and the American company Stryker, which specializes in medical equipment.

Jaap Bonjer deserves recognition for his vision on improving healthcare in the Netherlands and beyond. His ability to take initiatives and bring people of diverse disciplines from both inside and outside the organization together and thereby using his network and social involvement, were decisive for translating his idea into a real social impact. Because of him there is a place where methods can be trained and tested in a better and more efficient way and doctors can intensively practice surgical procedures, both surgical residents as surgeons who have to practice new methods. This has an impact in third-world countries as well, as there is a large shortage of trained personnel.

Jaap Bonjer: “The fantastic collaboration between a team of passionate Amsterdam UMC staff and employees of Stryker forms the foundation of the success of the ASC.”