The Impact Award has been awarded to researchers who have realized an important contribution to society with their impressive innovations.

professor of surgery at Amsterdam UMC, received the award for the establishment of the Amsterdam Skills Center for Health Sciences (ASC). Because of this, the Netherlands has one of the most advanced surgical skills training centers in the world, with for instance 12 operating rooms and various laboratories.

professor of Physics and Life Processes (VU) received the award for commercializing their high-quality optical tweezers and fluorescence microscope for fundamental research. This formed the foundation for the spin-off LUMICKS, which could call itself the market leader in high-tech measuring instruments for dynamic single-molecule analysis.

Professor of Poverty Interventions (HvA), received the Award for his research on poverty and debt issues. Van Geuns has managed to make a difference to people who live from day to day. Debt issues is a broad social problem.

Erik Scherder (Vrije Universiteit Amsterdam) received an Impact Award for his important contribution in bringing knowledge about the brain to a wider audience. With his love for the brain and the patient he has meant a lot for al lot of people; for young people with severe injuries to seniors with a cerebral infarction or dementia.

Marcel van Herk (Netherlands Cancer Institute) received an Impact Award for his important contribution to the development of image guided radiation therapy. The accuracy of radiotherapy has improved considerably, saving countless lives or prolonging them. 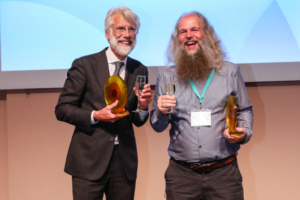