In 2018 the Impact Award has been awarded for the first time to researchers who have realized an important contribution to society with their impressive innovations. The Impact Award was awarded in two categories: alpha/gamma and beta/life sciences.

The Impact awards 2018 went to:
Erik Scherder (Vrije Universiteit Amsterdam) received an Impact Award for his important contribution in bringing knowledge about the brain to a wider audience. With his love for the brain and the patient he has meant a lot for al lot of people; for young people with severe injuries to seniors with a cerebral infarction or dementia.
Barbara Baarsma: “He is not only super-inspiring for scientists and students, but also makes ‘ordinary’ Dutch people aware of the fact that caring for your brain is not only important but also fun. His enthusiasm is contagious.”

Marcel van Herk (Netherlands Cancer Institute) received an Impact Award for his important contribution to the development of image guided radiation therapy. The accuracy of radiotherapy has improved considerably, saving countless lives or prolonging them.
Barbara Baarsma: “Marcel van Herk is a mathematician, it-er and engineer, a human centipede with a heart for medicine. He once dreamed of space travel, but he is so captivated by this subject that he no longer wants it. And he would not even accept an offer from Elon Musk.” 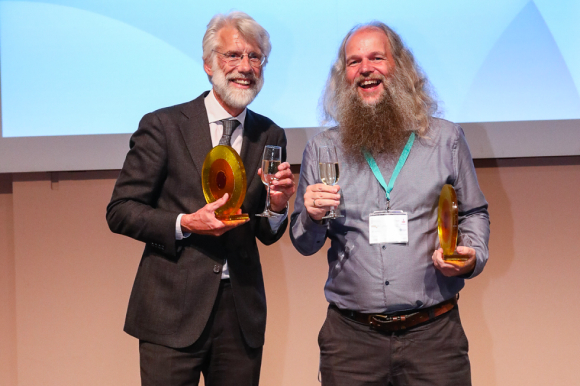